In the fall of 2007, I went to Chicago to pick up a 48′ Silverton to bring to Florence.  The first day out, I met a nice couple who were doing the great loop in a 40′ Grand Banks East Bay for their honeymoon.  They had spent most of their boating time on the East Coast and had little experience on the rivers.  After a short visit, they decided that they would travel with me until we got to the Tenn Tom Waterway.  We spent several days together and really got to know each other.  When we arrived at Aqua Yacht Harbor, my wife joined me and we all had dinner together.  We decided to meet up again at Orange Beach, AL in a week since we were going to be there anyway.  Three more days together really strengthened our relationship.  Then a week before Thanksgiving, I was bringing another boat from Virginia Beach to Palm Beach and decided to spend Thanksgiving in South Florida.  So I went to see Todd and Karen in Miami.  I went to Thanksgiving dinner with the Whitman Family at the beautiful Indian Creek Country Club in Miami Beach.  The Whitmans treated me like family.  Todds parents are very interesting and have accomplished many things in their lives.  Mr. Dudley Whitman built the very first fiberglass boat.  He and his brothers also pioneered surfing the East Coast of Florida on surf boads they built themselves.  They have a private museum that I was invited to visit.  It was phenomenal!  While fiberglass was already in the development stages,  Mr. Whitman was one of the first people to apply it to a boat.  The museum has two of the original models that he built at his company, Challenger Marine.  His story goes on and on and I am including some links below to learn more about him and his brothers.  I hope that you find it as interesting as I did.

Update: Mr. Whitman has since passed away, but is a true legacy in the boating industry. There are many different stories about who built the first fiberglas boat, but this is a good one.
Dudley Whitman 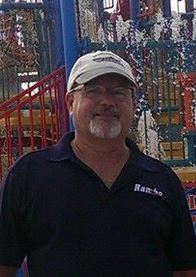 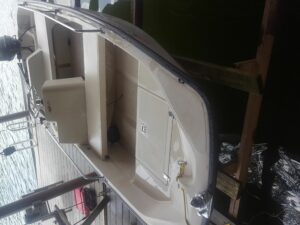